The Avatar Should Explain My Absence 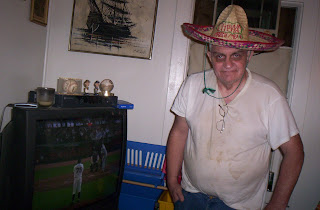 The avatar may not work but the little guy, borrowed from my friend sheanc, is supposed to be banging his head on the keyboard. (Update - it worked once I posted it).

The computer is working, I replaced the mouse which helped a lot so far as being able to read my email goes, but the processor is slow. It means that it takes forever for a blog to load and even longer for the comment box. I'm back to trying to stay caught up with at least some of my friends in the Bloglines feeder but commenting has been difficult. I'll keep plugging away at it.

I have several new signers on the guestbook whom I haven't met. To my visitors from Kenya, China, and Malaysia, hello, thank you, and best wishes to all.

To any of you who have sent me Facebook messages. I finally have my password back and tried to catch up somewhat. Unfortunately, it's as slow as Blogger at the moment. I'll go through them a little at a time - meantime I tried to send most of you a hug or a flower.

Dawn and I were out shopping the other day and spotted a yard sale half a block from here. I've been looking for living room chairs to replace our small couch. You can see it's a tiny room and the couch took up most of it. The two chairs were sitting in the yard begging me to take them home. I got the two for $55., a real bargain since they're in almost perfect shape and exactly what the Ray, the cat, and I wanted. Both of them rock and recline and they're so comfortable. Spunky has never been a lap cat but suddenly she's turned into one. She'd prefer to have the chair to herself but will settle for flopping down on Ray.

Ray is continuing with his gardening. We've added fresh herbs, chamomile, several varieties of peppers, one okra plant (for me), a strawberry plant for Dawn's daughter Destiny, and lots of flowers. The strawberry has two tiny berries already and one rose bush has a bud. The cucumber didn't survive but everything else is doing fine so far. The weather here has been beautiful but they're predicting 90's (about 33 C) for next week. Mornings stay chilly still.

I stopped off at Goodwill the other day looking for pillowcases. Found them, several small plates I've been wanting, three pretty coffee cups (mine weren't fit for company, poor things), and a sombrero for Ray (from Chevy's). He doesn't need to be out in the yard without some protection and that will do it nicely. I should take his picture. (Just did - see above). I caught him watching the ball game in the living room while I'm doing the same thing in here. Should have had him change that shirt first - he was mowing the yard in it.

He's doing well although his leg was swollen last week. I think he overextended himself with the planting and weed digging. I nailed him to his chair for most of the next couple of days with his foot elevated and it looks normal now.

Dawn is planning a barbecue here for my birthday a week from Saturday. Should be fun. I know she's making a triple chocolate cake and we'll keep the rest of it simple. Hot dogs, hamburgers, etc. At last report, Jim is supposed to be here from Southern California. I think it was supposed to be a surprise but Tim told me and then forgot that he had.

Not much happening out of the ordinary. Friend Janet and I are going to a play at Merced College (our Junior College - the other is University of California - Merced) on Sunday. I can't remember the name but I'm sure we'll enjoy it; just for the company if nothing else.

Hope all of you are well. Again, I apologize for not being around more.