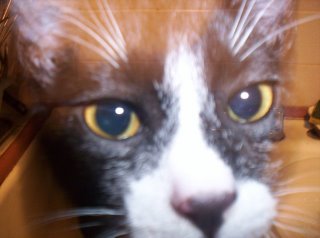 Had to be one of the girls who took this picture of Spunky. I'd never point a camera that close to a cat.

Let's see, other than my Elvis sighting, what happened today?

Not a lot. A few errands, a loss for the Giants (sorry Mollie), and finally a word from Andrea (formerly) in Japan.

Our District Attorney may find himself at the defendant's table instead of his usual spot. Much excitement around town.

Over the past year or so he has (allegedly):

Impersonated an investigator to settle a dispute between a relative and a local shopkeeper
Used a government cell phone while taking money for his private cell phone expense
Served alcohol to an underage person at a country club party who was subsequently killed by a hit and run driver while walking home (he thought the person at the door had checked i.d. so this by itself might have gone quietly away)
Used an SUV purchased with a Federal grant for his deputies and at the same time collected money for use of his personal car on the job.

(All of this has been part of an ongoing series in the local paper so I'm in no danger of a slander or libel suit).

Wow. We still have an old boy's network around here but it's beginning to crack in places. We're waiting for the next shoe to fall.

Conversation with Rochelle who was sitting drawing at the kitchen table with a ball point pen.

Rochelle: Would you put this on the computer later?

Ann: Sure but maybe tomorrow okay?

Rochelle: Okay - I don't have no pencils.

Ann: I don't have any pencils.

Thanks to all for comments. Today was busy and I may not have gotten back to everyone. I especially appreciate all the kind words about Elcie and her problems. The support and ideas have been helpful. Poor kid has enough going on in her life without this.

Take care - talk to you tomorrow.

ok - love the pic. And I've been watchign out for Andrea and again I miss it!!! Must go leave her a note! She'll be landing in my city!!!

The conversation with Rochelle is really funny! Sounds like one I'd have in my home. ;)

Hi Ann,
I would rather have our cold weather than your 30c, I would prefer it if it stayed around 24. I always feel that you can get warm, but keeping cool is not easy.

I am going to have two Falls and winters this year as Walter wants to go back to Germany & the US later in the year.

I still think you are an exceptional lady with all that you do and the way you care about people.

I was going to write a rant about corruption in public jobs, but I just don't have enough time.

Besides, I have my own blog on which to rant!

we are grammar sticklers, and I am usually on the losing end... :)))

Wow! That sounds as bad as what happened here!

We had a deputy DA in Madera that was caught using drugs(and probably other things as well), then he burned down a wing of our Madera Court house to burn the police report(s).

All it got him was more time behind bars!

Love the kitty picture, it just captures the essence of catness.