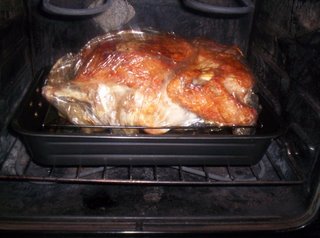 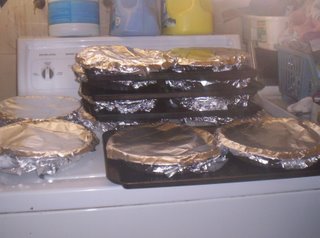 Turkey in oven - Pies stacked on washer. I'd better grab that bird out of there. (Update for pics at 11:00 a.m. Turkey is now out.)

I should have prepared this post yesterday but I didn't.

It's 7:00 a.m. here on the west coast and the turkey is in the oven, the girls and Ray are still asleep, and I'm catching my breath for a few minutes.

Twelve pies are wrapped and sitting on my washer. We finished up at about midnight with all of them. My neighbor asked if she could swap two Koolaid pies for a pumpkin and pecan. I had to google them of course and then realized I'd eaten them at potlucks in the south without knowing what they were called. Basically they're koolaid, condensed (not evaporated) milk and Cool Whip poured into a graham cracker crust. She made them in Red, White, and Blue. A little sweet for me but the girls will love them in very small servings.

I'll probably send a pumpkin pie over to my son's family along with a little turkey and ham since they can't make it here this year.

Tim called me a couple of days ago to tell me he was watching Rachel Ray on Food Network prepare a 60 minute Thanksgiving Feast. She prepares her stuffing but instead of baking it in a standard dish makes individual servings in muffin tins. I never stuff a bird either so I drug (dragged?) out my tins and going to try it with at least part of the stuffing. She may be on to something.

I spoke too soon. Elcie's awake.

Sometimes I get so caught up in day to day stuff with it's associated trauma I forget to be grateful. The girls are healthy, usually happy, and growing up quickly. Ray is doing okay considering the year he's had in and out of hospital.

We don't have much money but we always have food and shelter. Many don't.

My Army National Guard son Jim is on the Mexican border but Southern California is not Iraq. And, speaking of Iraq, a local friend sent me this link yesterday. It's a way to provide moral support to our troops with correspondence.

Tim is healthy and working at a job he enjoys. Yesterday was his 34th birthday and I forgot to mention it here. I did send him a silly card about monkeys and tattoos. Belated Happy Birthday Tim.

Carol still seems to be in remission although she's had some problems lately.

And it's my second year of writing in far too much detail about the minutiae of my life thereby breaking blogging rule #3. I think I'm breaking 6 out of 10.

I look over at the blogroll and my email list and wonder where all these wonderful people came from. Thanks to all for the loyalty and kind words.

Ray is stirring around. I wouldn't exactly call it awake just yet and cats are gathering. They smell the turkey.

I'll try to take some pictures or I may just let Rochelle do it. She's the best with the camera so far.

Koolaid pie is new to me. Eek.

I've used the muffin tin tip for a few years now. Just threw mine in the oven actually--we eat early.

How did we ever cook holiday meals without a laptop in the kictehn to Google last-minute recipe help??

Happy Thanksgiving to you Ann - 12 pies ? Gosh ,thats some feast you got going there.

Have a very happy thanksgiving.. and, know I counted you among my blessing at ours last month. Love to all.

We make a similar pie with jello and cool whip. Yum!

Happy Thanksgiving! Hope you have a great day!

Twelve pies!? And was the turkey out before noon? You are one amazing granny!! Especially to think that you even had time to blog about it. I'd be in a heap by now.

That turkey sure looks good!! And look at all those pies! I'd never heard of Kool Aid pies, how very neat!! So much preparation goes into making holiday meals and yet we eat it in a matter of minutes!! I've been baking again today and almost done...I want to be able to decorate this coming weekend:-)

I've just been to Carole's for coffee and cake, so I'll be with you shortly for Thanksgiving dinner!

Wow, you have been busy and it sure looks good! Have a wonderful day with your family Ann and like you, I give thanks for my blessings, too. So many people are much worse off.

Yum! Looks wonderful. Hoping your Thanksgiving was a good one.

Wow, you do more in a morning than some peops do all week.

I didn't realize there were 10 Blogging Rules. Where can I look that up? I'm probably transgressing all over the place!

Well hope you had a great Thanks giving! The Turkey looks delicios! I've never really celebrated Thanksgiving in Sri Lanka and they don't celebrate it here in UK either.

As ou can see I finaly found some time to visit a few blogs, things have been unbelievably hecic.

My daughter's little black and white cat come in and we had to chase him out again, he smelled the turkey too. Then our elderly dog Mitzi made her slow way in and had to stand in the way sniffing, 'hmm humans cooking want food too'.

Happy belated birthday to Tim. Does Tim have or like tattoos? Or is he a tattoo artist.
Just wanted to know because in the last 3yrs I gotten 13 tattoo and the artist here his named Tim. People think I'm going through my second childhood because I started getting tattoos at age
51. I tell people it's my body and it is an expression of art.