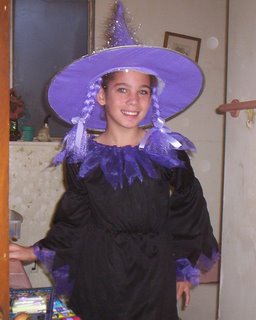 And here she is in all her Halloween glory in our badly in need of painting front bathroom. Ignore the background - at least I cropped out all the mess that goes with 3 vain little girls getting ready for school.

The splotches on the back wall are the result of bribing Elcie with stickers for toilet training. It worked beautifully but I now know that cheap stickers don't peel off.

I'll have pics up of all of them later today or early tomorrow morning with a rundown of our frantic weekend (still frantic) but Rebecca gets this post all to herself. 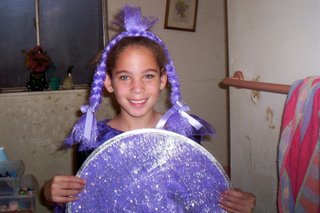 I can't figure out why Middle School lets them wear costumes but Elementary (where they really enjoy them more) doesn't. Elcie's waiting for tonight but the other two went whole hog. I think she's a good witch and a purple one.

Rebecca is the youngest great-granddaughter and the one we call our miracle child. Her mom and dad were living with me (and had been for almost two years) when she was born ten months after her next older sister. She wasn't due until early January.

I know they save babies smaller than she was but we were still scared. Two lbs, five ozs when she made her appearance. The local hospital sent her in an ambulance to Valley Children's which has a state of the art NICU.

She came home at about 4-1/2 lbs (too soon - she was very frail and just didn't "look right" to me). I'm still angry all these years later. She went back 3 days later with RSV. I found her barely breathing (just a short time after we checked on her). CPR by her mom all the way to the hospital - faster by car from here than ambulance. Once again we were pacing and praying. Obviously she's a tough little kid.

Then of course we worried about all the other things that can happen with preemies. Almost none of them did. She's had surgery on her eyes (twice) and her feet were casted to correct toe walking which may or may not have been mild cerebral palsy. If so, it's very mild. She's fine now and just look at those eyes. Unless she's very tired, they're perfect and as blue as the sky.

Update: I was responding to a comment when I remembered the funny side to the Rebecca birth story (which I may have told before).

Her mom's first sign of labor was a desparate need for the potty. We managed to get her out of the bathroom and on the hall floor while we were calling for an ambulance.

To this day Rebecca swears she was born in a toilet. We keep telling her she wasn't (close call though) but her version is much more exciting.

I don't have favorites, they're all very special in their own ways, but Rebecca is far and away the most "interesting". She's a non-stop chatterbox and never met a conjunction she didn't like. She does not know how to end a sentence and she often forgets to breathe. The very qualities that I'm convinced helped her survive her shaky start are the ones that can drive me up the wall at times. She has always been and will always be a fighter.

She's impulsive and she has a very short fuse. Of all the girls, she's the one who recognizes injustice the fastest and reacts accordingly. On the other hand, she laughs the most and she's the one most apt to bring me flowers from her walk home and spend 30 minutes telling me about her day. I hope that doesn't change.

She's fastidious, almost to the point of obsession, with whatever interests her. She's my best cook and certainly my best cleaner. She could be an A student and finally this year she's working hard on that. (See previous post about her math intervention teacher).

And, of course, I think she's beautiful.

Becca-boodles, you are my treasure and all of you are my life. Happy Birthday, we'll have your cake and ice cream on the weekend, and I bet you'll have lunch or dinner with grandma Ann and pick out your present too.
Posted by Granny at 10/31/2006 07:50:00 AM

My goodness she was small! But what a blessing she is!

What a sweet post about your Rebecca! She's a beautiful and special little girl-from what I see and hear of her!

She is a very cute witch! Looking forward to seeing the other girl's pictures!

Oh crap, Granny--now we have a post that actually contends with the father's day post for Most Likely to Make Mommymatic Cry at Work. Thanks for that.

Of course I'm kidding. Happy birthday, Rebecca, and never let your granny forget that she is as much a gift as you are!

Happy Birthday Rebecca! I hope you have a fantastic year and a wonderful life. You're very loved, and that's always a good start.

Awww... she was born at home? Wow, what a fighter. She is adorable!
Tessa walks on her toes. Should I be worried?

Happy Birthday Rebecca! Happy Halloween too! I loved reading about your amazing start in life!

She sounds like a lot of fun, the kind of person I'd like to know. That she's only 11 is amazing. Happy birthday & happy halloween to everyone :)

Oh, how sweet, I love to hear you talk about your girls!!

Happy Birthday Rebecca, people like you are what keep the world moving!

Hello Ann ~ I just want to wish Rebecca a very happy birthday ~ 11 years old ~
She has done well and so have you to get
to this stage. I hope she had a wonderful birthday and a great party
cake and icecream etc. She is the kind of witch I like, not scary, just lovely.
I hope you all ahd a great Halloween.
Take care, Love, Merle.

I say Happy Birthday too, Rebecca. You sounds interesting and full of life.

Happy Birthday Becc! Love the purple hair, I wish you many years of smiles and those sparkling eyes.

Oh Ann this was beautiful and just look at her smile. She gorgeous with those blue eyes. And I love the outfit. She looks great in purple

I think she's beautiful, too, inside and out.

Happy Birthday to Rebecca!!! I'm so sorry I'm late in wishing her that...hope her day was a fun one:-) She makes a beautiful purple witch...she was indeed a miracle baby and what a lovely young lady she's become!! Happy Halloween dear Ann!!