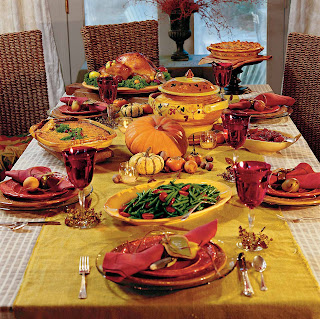 Tomorrow may be busy so, just in case, I'm wishing all my online friends a Happy Thanksgiving now. If you don't live in the States, have a wonderful next Thursday.

Ray saw the surgeon for the last time yesterday. Clean bill of health and no more insulin or horrid testing four times a day. He'll still have to careful for a while and stay with some medication but the worst is behind us. Right now, he's trying to get a dvd/vcr player hooked up for me in here and has almost succeeded. He has audio (ABBA - Waterloo) but no picture. Or did. Now he has a blank screen but it's still better than I could do.

I'm going to leave him to it and go prepare dinner. Take care everyone.

P. S. 15 minutes later. I left the room for a few minutes, came back and he has audio and video. We had the wrong cable. Now happily watching (more listening to) Marriage of Figaro which I can see from the kitchen.
Posted by Granny at 11/20/2007 03:25:00 PM

Good Evening Granny,
Woooohoooo!!!! Congratulations on Ray getting a clean bill of health. I know that takes a load off of you. I think I'm coming to your house for Thanksgiving. I see you have the table already for us. LOL. Thank you for the Thanksgiving Wishes and I would like to wish You and Ray a "HAPPY THANKSGIVING" as well. I hope yall have a great day. I don't know how to hook any of that stuff either. My hubby always does that kind of stuff. Take care my friend and have a great week and may God Bless You and Yours. Again, "HAPPY THANKSGIVING".

Happy Thanksgiving Granny and Ray. You truly have something to be thankful for this year...hugs:)

I'm so glad Ray was released by the surgeon. Hopefully he'll improve daily and have much better health than before when he was in and out of the hospital like a yo yo.

Happy Thanksgiving to you and yours, Ann. Hope it's wonderful and blessed.

Congratulations on Ray being released by the surgeon. I will continue to pray for his good health.

Great news about Ray. Chuckled at the quote by Erma Bombeck, we are not allowed to watch football until the meal is over - the Spice's orders. :) Hope you have a wonderful Thanksgiving. ec

I'm so glad that is good news about Ray.

Happy Thanksgiving to you too.

I adore Erma Bombeck, I want to be her.

Wonderful news of course about Ray, and I hope you have a lovely Thanksgiving.

Granny, Erma Brombeck was a smart woman....She is right that it takes forever to cook the dinner and only a few minutes to eat it. She failed to mention that it takes forever to clean up afterwards.....My kids have a tradition of going to a movie together after all the guests leave and guess who gets to clean up....Why do I put up with it, except that I am glad that the kids are doing something together. I love it just the same.

VCR's are a pain in the _ _ _ . Glad your husband got a good report from the doctor.

Have a happy Thanksgiving, Granny.

Erma had insight such as you possess.:) I don't know our schedule yet, but I'm sure I'll be told when I need to know. So in case of anything, happy thanksgiving, and it's wonderful news that Ray is improving so well!

Have a happy Thanksgiving. I hope Ray continues on the upward path health wise. You sound a rather more clued up household than us as we have lost the ability to play DVDs but can get lots of digital programmes. All will be sorted when # 2 son comes.

OH that brought back memories of my husband trying to hook up our components. After hours he gave up and guess who ended up doing while everyone slept.

I am so glad to hear that Ray is doing so well!

You enjoy Thanksgiving tomorrow. I am getting nervous just thinking about all the preparations and the mess after all this is done.

Happy Thanksgiving!
Wonderful news about Ray's health and isn't he the handy one!!
xo

OldLady Of The Hills said...

GOOD NEWS, all around!

I hope you have a LOVELY Thanksgiving, my dear...It is my favorite Holiday too, though I can no longer celebrate it as I used to...But It is STILL My favorite anyway...!

WTG Ray!!! Glad things are going better!!!.
Have a safe and blessed Turkey day Ann!!!I'll be working like always :).
God bless and have fun:)
Donna

Good for RAY!!! :) And a Happy Thanksgiving to you both!

Happy Thanksgiving to your family.

Oh congratulations to Ray, both for his clean bill of health and for getting the dvd going!

Have a wonderful thanksgiving and don't eat too much, or if you do, make sure you have some Mylanta in the cupboard...lol!

So glad to hear Ray's home and with a clean bill of health! Have a very happy thanksgiving! :)

Wishing you and your lovely family a terrific Thanksgiving, Ann.

Hope you had a great turkey day!