Here He Is Again 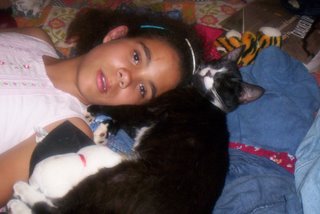 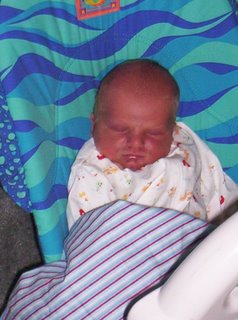 I promise I won't keep doing this but wanted you to see him with what little hair he has and without the purple face. He's shaping up nicely.

(The baby, not the cat. Photos reversed somehow and I'm not about to try to fix them.)

Elcie had a good day today. She blew up once at her sisters but that's normal. She's been cheerful and even laughed when I told her the story of the Pied Piper. Don't know how she missed that one.

Rebecca and I made it to church about 20 minutes late but in time to hear Pastor Charlotte talk about da Vinci (book and movie). Bottom line - if you like mysteries and code, you'll like the movie. Just don't take it as gospel. I learned a lot about Constantine and Nicea I hadn't heard before.

Rebecca helped me prepare dinner. Meatloaf, mashed potatoes, and succotash. She did every bit of the meatloaf (simple version) and learned what succotash is. She thought she'd eat around the baby limas but I think she ate a few.

Sh'e going to be a cook. She's neat and precise, remembers what I've told her from the last time, and cleans up as she goes along. That's my girl. She decided to clean the silverware drawer once she'd finished. Looks good although Ray won't be able to find a thing for days.

I have a couple of bookcases she can tackle when she gets bored.

Other than that, they all went for a walk in the rain to the school and back. Elcie held an umbrella over her chair so she wouldn't melt. They all learned that bumbershoot is another name for umbrella and on the way back from church I taught Rebecca the Russian words for yes and no. She made a song out of them. They may be the only Russian words I know. Except for Pravda which is truth, I think. It's been vocabulary day here although I'm not sure how much those words are used in everyday conversation. Rebecca likes nyet. She would.

It's been a good day. Rochelle's been a little draggy but I think she's okay. She hit her knee on the bike frame and it's still sore. I've said before she's the athlete and the one with the most bumps and bruises. The picture at the top is Rochelle with Fidget and Fidget with a stuffy (also a small stuffed tiger) on my bed which is at its worst in the late evening. I shovel it off to have a place to sleep. For those of you who haven't heard before, our bedroom is also our sitting room and the storage area for the girls' clothing. There is no way to keep it pristine.

The girls have the living/dining room as their area and Elcie has her own postage stamp bedroom with a t.v. and the other computer (parental locked). The little girls share the large back bedroom with their Grandma Carol. It's huge. Odd but it works for us.

Thanks to all of you for the good wishes and advice about Elcie. Several of you suggested Big Sisters or something like it. It doesn't exist here (or I don't think it does but I'll check). Something like that might help. All her classmates like her but she's not in her neighborhood school so at the end of the day they go their separate ways. She really is isolated except for the sisters. She needs a girlfriend. Most girls do. Project for summer - matchmaking. It's not quite that simple but I think having a friend that she can hang with will help. She's agreed to be a helper at Vacation Bible School this year and I hope she'll get back to singing again.

She's always been so brave and until this past year has seemed happy. She's still brave but I want my happy Elcie back.

Ray's still doing well and now it's Carol's turn. Her tooth abscessed suddenly and I took her to the e.r. this afternoon. They gave her antibiotics and she'll have a prescription tomorrow. She's already feeling better and managed to eat. We can't mess around with any infection because of the chemo and her compromised immune system.

Can anyone explain why I never see typos until they're green on purple? I'm typing this in "edit" and will probably be back at least one more time. Spell check doesn't help. My typos are usually actual words - just the wrong ones.

I'm still going to backtrack on visitors - I promise.

Note to Mollie - Giants 6 Oakland 0 Cain pitched a one hitter.

I'm glad you had a good day excempt for Carols tooth, poor thing. Yeah you do have to stay on top of those things with cemo, it can be tough.

I hope things get better with Elcie. She's having such a tough time, and she probably dosen't know what's wrong either. It's tough being a teen, and she has it tough then others.

Hi there, such a lengthy post, and my question is "what is succotash"???

Hi Ann ~~ Glad to hear you had a good day. It is great that Rebecca is learning to cook and being helpful.
Little Jonathon looks like a contented
baby. Rochelle and the cat look cute.
I hope your daughter is better from her tooth trouble. I hadn't heard about the
bumble bee before. Pays to be deaf
maybe. Take care Ann. Cheers, Merle.

Bit late to say I like the green on purple. Don't know why, I just do!

Hope Elcie gets a couple of girlfriend's this summer. We all need 'em!

love the pic of Jonathan... what a cutie!! Rochelle too...

more rain here, and might top 50 F. we have to keep reminding ourselves we are in the middle of a drought... but actually much worse in the south...

J's glasses are hanging by a thread. have to go sort that out today, and she is also getting a filling... when it rains, it really does pour... :))

I went and saw the Da Vinci Code the other night. The only reason I went was it formed part of our fund raising campaign for legal costs for a case we are fighting to allow a couple to stay in Australia under current immigration Laws. The critics were not in favour, my suggestion to you if you do go, is not to expect too much. Amazing how the hint of secret code, however implausible, excites such an interest. Some folks enjoyed it and thought of it as an interesting story.

Now, I can't believe I didn't realize Elcie was in a wheelchair. What is the reason, if I can ask, Ann?

What are you talking about? Of course we want to see that baby!!!!! Keep 'em coming!!!!

Glad that Elcie had a good day and a good laugh. That's important.

Sounds like your house is full!!! I'm glad you're able to stay positive.

Don't worry about typos ... my blog is full of them! I wish their darn spell check would work ... I can't get it to work anyway!!!

I am requesting an official boycott of the "Reject The Koolaid" Blog.

The reasons are given in my latest post and I would appreciate your assistance with passing the message round.

Bummer about Carol's teeth. I hope it can be sorted soon, and at least that it has been eased for now.

Aaawww, the bubby looks gorgeous. I agreee on the typo comment ... I never see mine until they are up on my blog ... when I preview it, I never see them, but when it is posted ... yep, there they are. Oh well, we are only human. We make mistakes. Doesn't matter in the overall scheme of things. It's what we say, not how it's spelt, that is important !!
Have a great week. Take care, Meow

love the pics...and what is succatash?..i have alwyas wondered

It's hard to tell who is the most relaxed, Rochelle or Fidget - or the stuffy. :) The little tyke seems to be having a better day than in the last picture I saw - he has more hair than I - that is not a difficult thing though. ec

I missed the first newborn post--so here is a late congrats on the new baby! I'm sorry about Elcie, hopefully she'll make it through all this junk and be better for it, in fact I'm sure she will.

It does sound like the day went better. Not so good for Carol and the tooth. I hope that gets taken care of quickly. Not much out there as painful as a toothache.