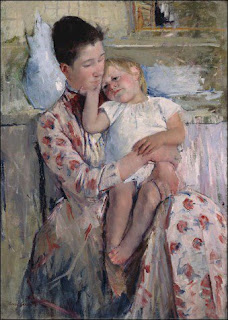 The painting was created by one of the few female impressionists - Mary Cassatt. I've had one of her prints (probably cut from a magazine at some time or another) hanging in my bathroom. I love her pictures of mothers and children.

Anyhow, after I wrote the earlier post today, I spent some time trying to catch up with my blogging friends and found this post on Josie's blog. She led with another Cassatt painting - the rest of her post was devoted to children's opinions of mothers. It's both funny and touching.

I turned on the news a little while ago. Praying my friends in Alabama, Georgia, and the Carolinas are okay after the storms they've endured. It's been one of the worst years for tornados that I can remember.
Posted by Granny at 5/09/2008 10:13:00 AM 14 comments: 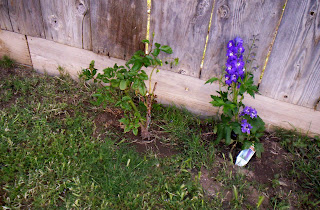 This is my Mother's Day plant from Ray. Purple of course - it's a delphinium and doing nicely. My one thriving rose bush has a bud. The others - we're not too sure - they may just be slow. The other flowers a little slow too but the labels said 30 to 60 days - I must be patient. One of the California department stores has a commercial showing a woman with her nose pressed against the store window saying "open, open, open". That's how I feel about our garden. It's the first time in many years I've had garden space. 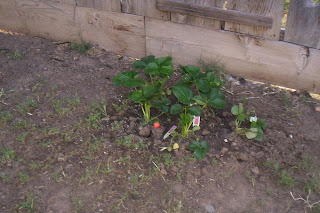 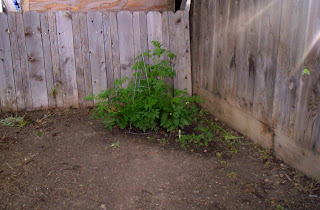 The strawberries are doing beautifully, the tomatoes are flowering, and the bell pepper plants have one tiny pepper each - so far. Soon I hope there will be more berries than Destiny can pick, wash, and eat. Meantime, I'm picking up a flat of fresh berries today or tomorrow (Dawn and I will share) and we'll have shortcake this weekend with homemade biscuits and whipped cream. Yum. 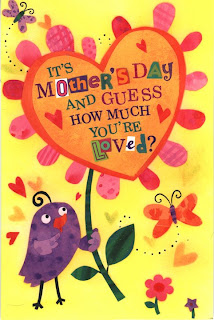 Thanks to Lynette for the card. Jim and Lynette have a blog just full of ideas, crafts, etc. I think all you clever people out there would enjoy it. I'm not crafty at all but it was still fun to look at.

A very happy Mother's Day to all, whether you celebrate or not.

This was taken yesterday. The sun was working against us but you can get the idea. Even our tiny Rebecca is taller than I and I think Rochelle has passed Elcie by a wee bit. From L to R - Elcie, Rochelle, Ann, Rebecca, and Ray. We had a wonderful time together.

This coming Sunday will be Mother's Day here in the States. It will also be my honorary granddaughter Destiny's 8th birthday. We're doing a joint family party here (my yard is larger than Dawn's) to celebrate both occasions. Should be fun.

Our weather continues to be lovely but we could use a little rain. Just not on Sunday, please.

Not much else going on at the moment. Please take a moment for the people of Myanmar (Burma). There are times when politics seems very unimportant. This tragedy, to me, is one of them.

These are some of the pictures I took in April. A few are of the birthday party, the rest are various people posing in Ray's sombrero (I, fortunately, was holding the camera). If I remember correctly, it's friend Dawn, her husband, and their daughter Destiny, and Ray of course. 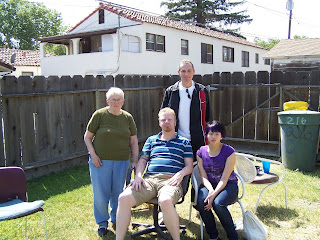 I have more pictures - you can see most of them at online gallery now that I've finally figured out how to do it. I won't try to identify everyone; some you'll recognize and others you haven't seen before. It was a good mix of friends and family. My computer geek friend John (the one with the new blog) took over at the barbecue, Reno and Lyman brought potato salad, extra chairs, and took most of the pictures. I took a few but not as good. The girls' mom and dad both dropped in; Tasha brought a couple of her friends. Dawn and family were there of course - she planned the whole thing.

If that gallery link works, I'll add it to the sidebar and refer to it whenever I have new pictures. It's certainly simpler than trying to post them all here.

This one (at top of blog) is 3 generations. Me, son Tim, grandson Wesley (girls' dad), and granddaughter Samantha (Jim's oldest). The only generation missing is the girls and I plan to see them next Thursday. Actually, there's still another generation; my mom will be 96 in July but it's a little far to travel from New York to California for a barbecue. Of course my oldest, Carol, wasn't there and she's still missed. Today is the one year anniversary of her death.

Jim's leave was postponed at the last minute. He was home by the Monday following and we managed to squeeze in coffee together (I didn't bring my camera because I didn't know I'd be seeing them). He left the next day to take his wife, Melissa, on a well deserved short vacation. His two youngest are growing like weeds. Zachary is a very mellow kid. He smiles constantly. Jonathan is about what you'd expect of an almost 2 year old. Adorable but active doesn't begin to describe him.

I'm seeing quite a bit of oldest granddaughter these days. She's busy with work, school, putting purple streaks in her hair (on her it looks good), but still managed to join Tim and me for a late breakfast yesterday.

Our garden is doing well. Destiny's strawberry plant has produced three berries which she has eaten. It's her plant although we may steal a couple for ourselves later on. It's doing so well I may pick up a few more - enough for a shortcake later on. The tomato plants are growing and the bell pepper has two tiny peppers.

Our weather continues beautiful but erratic. High 80's one day and down to mid 60's the next. Typical spring.

Much of the country is not so fortunate. Southern California is once again dealing with fires. Maine is flooding. The entire mid-country is going through more tornadoes and there have been fatalities in north central Arkansas. CNN ran a clip of a tornado very close to our friends Karen H. and Diane and her sisters. So far as I know, they weren't affected but it did touch down fairly close to all of them. More are expected today. I heard that Arkansas has now passed Oklahoma as "tornado alley". Please keep all of them in your thoughts and prayers.

I'm now working with a newer computer. I'd forgotten that I had the girls' machine. John took it home with him, performed his magic, and swapped it for the one I'd been struggling with. This is much better. It had never worked well for the girls but we think it just needed a thorough housecleaning. I'd bought it used and it was probably full of viruses from the beginning.

We're leaving in a few minutes to go shopping and maybe have breakfast out somewhere. I'd better close this out, put my shoes on, and finish getting ready.