Let's see if this works

Yes it does. It only took me 3 years to figure out how to do a slideshow. Here are the pictures of Jim and family referred to in the post below.

There is some duplication. I was getting a little glassyeyed by the time I figured it all out. 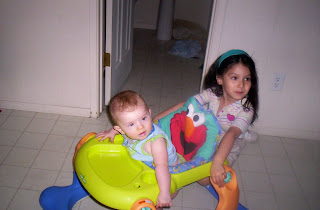 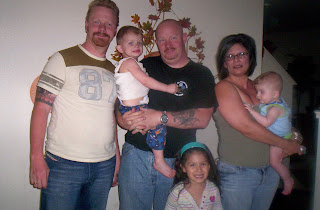 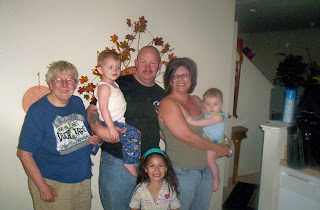 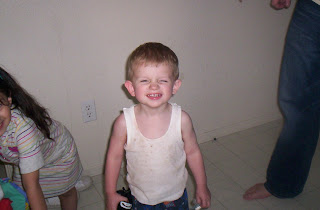 To start with, we're all okay.

My eyes are still bothering me when I stay here too long. Typing isn't a problem; reading is.

Other than that, the last few weeks have had both good and not so good news.

The good news - my son Jim is home until next week. His birthday (40) is tomorrow and we held a bbq this weekend in his honor complete with a Sponge Bob birthday balloon. He brought his oldest daughter (almost 19) and both babies. They're adorable and had a great time. My pictures didn't turn out well but I'll be seeing Jim, Tim and family later this week and maybe get some better shots. What I have are in the Kodak gallery (see sidebar).

The not so good. Next Monday he'll be leaving for Fort Dix, NJ and thence to Iraq. Unless he fails yet another physical, he'll be stationed there for a year. He tells me that as things go, his assignment will be relatively safe.

The good news - Tim has signed up for college courses for summer and fall. The not so good - he lost his job. Hopefully, he won't be unemployed for long.

My daughter would have been 52 yesterday. It doesn't seem like more than a year since she left us.

I haven't seen the girls lately but now that school is out for two of them, I'll schedule some visits for the summer. We talk often.

The garden was damaged but not destroyed during a two day windstorm. We replanted the tomatoes and propped them back up. We have a few small, green tomatoes but some were blown off the plants. The peppers and strawberries are still doing well but I haven't seen any results yet from the flower seeds.

Today is our second Primary election of the year here in CA. I almost forgot to fill out our ballots but they're done and I'll drop them off when Janet and I go for our usual coffee and shopping. It's goofy - we had the early Presidential primary and then turned right around and did another for our Representative (running unopposed), State Assemblyperson (running unopposed), two local offices (also unopposed), one recall (which should have been removed from the ballot since the initiator changed what passes for his mind), and two Propositions (which contradict each other). There should be a better system.

The weather dropped from very hot to chilly back to quite warm again. Disconcerting to say the least.

I've been thinking about taking the blog private. One of the reasons I haven't written much is that I have to be much more careful these days about what I say. It wouldn't affect any of you - I'd send out an email letting you know how to access it and I'd be free to say more without worrying about anyone local reading it that I'd prefer not. I haven't decided yet.

I woke up at 3:00 this a.m. and used the time to make some order out of the collection of paperwork. It's the easiest time to work on it - no distractions. I'll probably take a nap this afternoon. I find myself most days getting sleepy right after lunch.

Dawn should be here any minute now so I'll close this out for now.