Tim, me, and several friends. 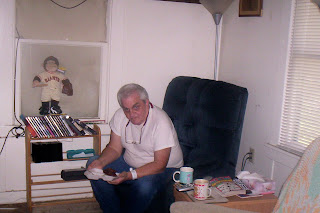 Ray of course. He can't stay in the sun long so we brought him his dinner.

The monkey in the back is wearing a San Francisco Giants uniform with #1 on the back of his shirt. That's the number of catcher and my current hero Benjie Molina and my birthday gift from Tim & Juan. The monkey is sporting a fielder's glove intead of a catcher's mitt but that's okay.

My friends brought me batches of flowers, knickknacks for my shelves, a stuffed animal assortment, a lightweight quilt, and a lovely lavender candle. I may never light it - it's too pretty.

We had a wonderful time. I made a bunch of baked chicken drumsticks which just needed a short time on the bbq, potato salad, deviled eggs, baked beans (from a can with a little cooked bacon) and cole slaw. Took a loaf of my banana bread out of the freezer and cut it in small slices. Did most of the work the day before (with Ray helping) so on Sunday morning all I had to do was the chicken and cupcakes (see next paragraph).

Dawn was in charge of the grill. We did hamburgers, hot dogs, the baked chicken, and boneless country ribs. We'd started off planning a small party for Dawn and her family, Ray and me. It expanded rapidly and we counted at least 20 and I think we had a couple of drop-ins (kids) I've forgotten. I kept thinking of people I didn't want to leave out so we ended up with my extended family, Dawn's extended family (plus the extra kids), and my friends John (my computer savior), his wife, Michelle, David (my coffee drinking buddy), and card playing friend Reno as well. Wish Jim could have been here but maybe we can do the whole thing again for Memorial Day. He should be home long before then. Or maybe we'll throw a party before then in his honor. I'm usually flexible.

Oh, and birthday cake naturally. Dawn baked a chocolate cake and I made a small batch of vanilla cupcakes for anyone who didn't do chocolate. (It boggles my mind that there is anyone who doesn't do chocolate but that's okay you know who, I love you anyhow.) I was joking to some on-line friends that if they heard about a fire in Merced, CA it would be the result of me trying to blow out 71 candles at once. We settled for 9 on the cake.

Does anyone except me frost cupcakes by dipping them into the frosting? Ray had never seen it done before. Color me lazy but it works. When I try to frost them the "right" way, they end up a mess.

It was a little warm, but otherwise a wonderful day. The kids played in the small pool, the rest of us pigged out. Other than the cooking I'd already done, I didn't have to lift a finger, even to take the pictures. I handed Rochelle the camera. I think the only person she missed was David who arrived after Rochelle had put the camera away. My fault; I forgot to get the camera back out. I didn't get all the pictures on the blog. A few turned out a little dark, even with some editing on my part. It's enough of a cross section though so you can get the idea.

Leave it to me to write nothing since Christmas and then cover you up with words.

Take care, all you wonderful folks. 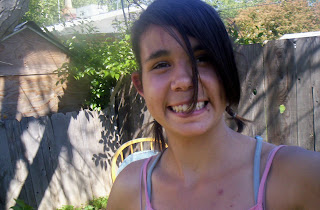 Rochelle - that is not a blacked out tooth, it's her hair hanging down her face (I don't know why).


Juan, Reno (both blending into fence), Tim, & I (with young friend). Tim and I are wearing matching La Boheme shirts from our afternoon at the Fresno Grand Opera. No, we didn't consult ahead of time. 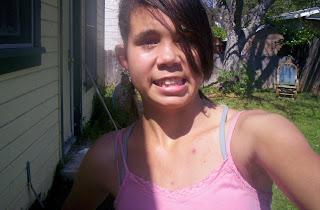 Rochelle once again. Why does she cover up those beautiful eyes? 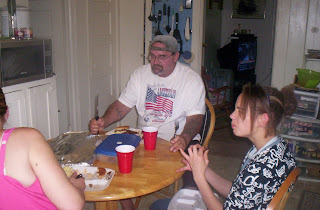 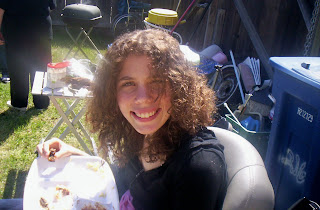 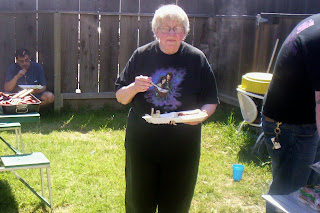 The guest of honor stuffing her face.

The one below is me, Tim, and friends. For some reason, silly blogger isn't letting me write below the picture this time.

Can you Believe an Update? 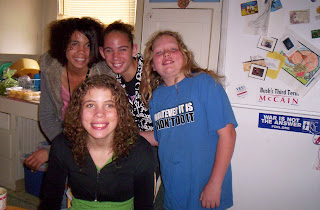 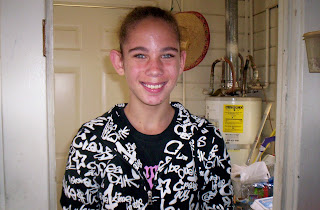 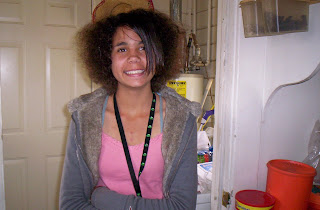 These pics were taken the day before Easter when the girls came over to help Destiny and her younger friend color eggs. I have more from yesterday's picnic which I'll add in a separate post.

So, what's new from me? We're still here, Ray stays about the same although the trips to the hospital are not as frequent. He putters about in the yard now that spring has arrived with a vengeance. Our temps yesterday and today have hit 90 (F).

We're planting flowers and veggies. I have tomatoes, leeks, bell pepper (capsicum), strawberries, and one lonesome okra. It was my experience when I lived in Arkansas that okra would overwhelm everything except the zucchini so I'm starting slowly. I don't want more okra than I can possibly give away. I'm not going to let a zucchini anywhere near this yard. We have some flowers already planted and two packages of zinnias yet to be put in the ground next week. We didn't have a lot of luck last year with our flowers but zinnias are sturdy and I have hopes. They're my favorite flower.

Friend Janet and I took the girls to see the new Monsters/Aliens film last week. We all enjoyed it. I usually wait for videos but with 3D, large screen made more sense.

Jim is safely home from Iraq but somehow injured his right arm while he was there (non-combat - it's a mystery). They think he may have permanent nerve damage. They can do something for the pain but he may lose partial use of the arm (heavy lifting, etc.) We'd expected him home a couple of weeks ago but they're keeping him at Ft. Dix, NJ and sending him back and forth to Walter Reed Army Hospital to consult with the experts. At least he's safe and we connect by phone. I know Melissa is anxious to have him home as am I.

Tim is employed at a veterinary clinic in Fresno as a receptionist. He's good with people and is fond of animals so it should be a good fit. Part time for now but that may change. Considering the unemployment in this part of CA hovers around 20%, any work is better than none. His hours are flexible so he can keep up with his classes.

Our Easter dinner was just the two of us but the girls showed up the next day to help us with the leftovers (after the movies). I did ham, sweet potatoes, potato salad, cole slaw, and a key lime pie (my first attempt).

Elcie will be having surgery later this week so will appreciate your thoughts. She's a trouper about it but shame she'll be in casts and miss much of the lovely spring weather. Each of her prior surgeries have helped her and trust this one will as well.

Let's see, what else? I went for coffee with friend David this morning at a cafe which is part of one of our local market/delis. I picked up one order each of chile rellenos and chile verde and an order of ceviche for dinner tonight. After all the cooking Dawn and I did for the bbq yesterday (see other post), I didn't feel much like cooking today.

Oh, and we've discovered long lost family. Tim went on a Facebook search and found a cousin. It snowballed from there and the other day I connected not only with my two nieces by marriage (to Tim and Jim's dad) but with my favorite in-law who I've always thought of as a sister. We're all so excited. Jim and Tim are thinking about a trip to Memphis later to connect with all of them and meantime there's the telephone, email, and Facebook.

When I lived in Arkansas (hi Diane, Karen, etc), my Aunt (by marriage), my sil, and I used to call ourselves the "outlaws". My beloved Aunt Clarice died several years ago but sil and I are still going strong. I think she and I are close to the same age - she might be 6 months older but I still picture her as young and so beautiful. We were both still in our mid 30's when I saw her last. Her oldest son and my daughter Carol were the same age.

Next weekend I head for Fresno and the opera. They're doing Gounod's "Faust" with soloists from the New York Metropolitan Opera. I have a good video but there's nothing like seeing it live especially with having a family member (Juan) in the chorus. I'm so looking forward to it. I think I may have mentioned seeing "La Boheme" last winter. In the pictures on my bbq/birthday post, I'm wearing the La Boheme t-shirt.

I'll be back with the other pictures shortly. Hope all of you are doing well. I'm sorry about my vanishing act but I'm back (sort of). Even if I don't post much here, I can be found hanging out at FaceBook and Twitter.